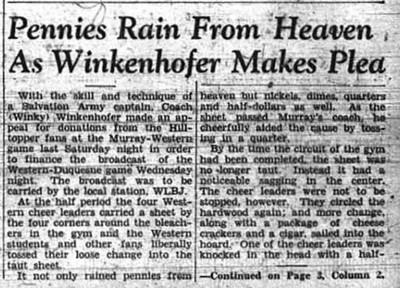 Article from the College Heights Herald about fund raising efforts for a radio broadcast.

With the skill and technique of a Salvation Army captain, Coach (Winky) Winkenhofer made an appeal for donations from the Hilltopper fans at the Murray-Western game last Saturday night in order to finance the broadcast of the Western-Duquesne game Wednesday night. The broadcast was to be carried by the local station, WLBJ.

At the half period the four Western cheer leaders carried a sheet by the four corners around the bleachers in the gym and the Western students and other fans liberally tossed their loose change into the taut shet.

It not only rained pennies from heaven but nickels, dimes, quarters and half-dollars as well. As the sheet passed Murray's coach, he cheerfully aided the cause by tossing in a quarter.

By the time the circuit of the gym had been completed the sheet was no longer taut. Instead it had a noticeable sagging in the center. The cheer leaders were not to be stopped however. They circled the hardwood again; and more change, along with a package of cheese crackers and a cigar, sailed into the hoard. One of the cheer leaders was knocked in the head with a half dollar . . .