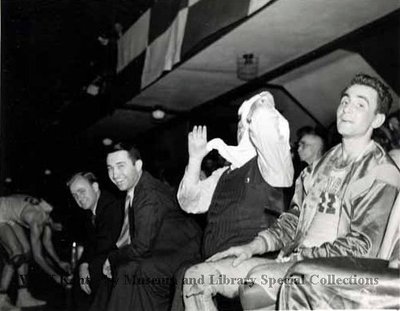 Caption in newspaper: [Buck] Sydnor Sinks a Long One. No, you didn't guess it. This is not a picture taken of a snake ritual. Neither is it Houdini and his disappearing piano act. Yep, that's right! It's Coach Ed Diddle, the world's champion towel thrower. The place, the Western gymnasium. The time, any night that Western plays basketball. The reason, the Hilltoppers have scored another two points.