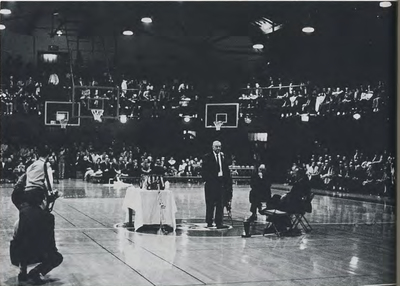 A special honors ceremony on the occasion of his 1,000th game gave Coach Ed Diddle the chance to take the microphone and express his appreciation for the 1,000 silver dollars he received from fans.

Diddle addressed the crowd: "If I start over again - and I just might do it - I'd do the same things all over with the same wonderful friends. I'm grateful for the little red wagon and for these friends and for having a wonderful assistant like Ted Hornback. In four more years I'll have to retire as coach, but I'll still be around. They won't even be able to run me off this campus."

Kelly Thompson called Diddle "the greatest coach in the history of basketball."

Afterwards, Diddle was reported as saying: "The only thing I claim to be famous for is that I'm probably the only coach in the country nobody ever tried to fire. I'm proudest of all for having friends.

"It's taking some country kid who is flat-footed, walks like he was following a plow, doesn't know much about basketball and make something out of him. I want that more than winning."