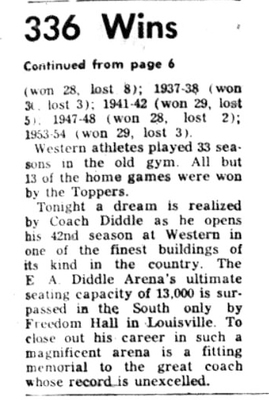 Western athletes played 33 seasons in the old gym. All but 13 of the home games were won by the Toppers.

Tonight a dream is realized by Coach Diddle as he opens his 42nd season at Western in one of the finest buildings of its kind in the country. The E.A. Diddle Arena's ultimate seating capacity of 13,000 is surpassed in the South only by Freedom Hall in Louisville. To close his career in such a magnificent arena is a fitting memorial to the great coach whose record is unexcelled.