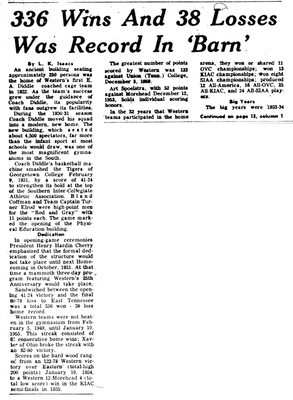 An ancient building seating approximately 250 persons was the home of Western's first E.A. Diddle coached cage team in 1922. As the team's success grew under the guidance of Coach Diddle, its popularity with fans outgrew its facilities.

During the 1930-31 season Coach Diddle moved his squad into a modern, new home. The new building, which seated about 4,500 spectators, far more than the infant sport at most schools would draw, was one of the most magnificent gymnasiums in the South.

Coach Diddle's basketball machine smashed the Tigers of Georgetown College February 9, 1931, by a score of 41-24 to strengthen its hold at the top of the Southern Inter-Collegiate Athletic Association. Bland Coffman and Team Captain Turner Elrod were high-point men for the "Red and Gray" with 11 points each. The game marked the opening of the Physical Education building.

In opening-game ceremonies President Henry Hardin Cherry emphasized that the formal dedication of the structure would not take place until next Homecoming in October, 1931. At that time a mammoth three-day program featuring Western's 25th Anniversary would take place.

Western teams were not beaten in the gymnasium from February 5, 1949, until January 10, 1955. This streak consisted of 67 consecutive home wins; Xavier of Ohio broke the streak with an 82-80 victory.

The greatest number of points scored by Western was 123 against Union (Tenn.) College, December 3, 1950.