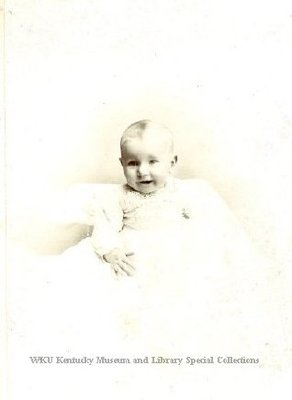 Margie May Helm was born in Auburn, Kentucky, August 21, 1894, the daughter of Dr. Thomas & Ellen (Blakey) Helm. From 1901 through 1910 she attended Auburn Seminary. In 1910 her father moved the family to Bowling Green where Margie attended Bowling Green High School graduating as valedictorian in 1912.

"She received her B.A. degree from Randolph-Macon Woman's College in 1916, and the M.A. degree in 1933 from the University of Chicago Graduate Library School. Miss Helm became assistant librarian at Western in 1920, librarian in 1923, and Director of Library Services in 1956. She served in this capacity, and as Head of Library Science, until her retirement in 1965. Miss Helm is a member of numerous professional organizations and has contributed articles to various publications. She won the Business and Professional Women's Club award in 1950 as the Outstanding Business Woman of Bowling Green. She was honored in 1964 as the Outstanding College Librarian for Kentucky by the Kentucky Library Association." [Peaks of Progress]

Margie Helm retired from WKU in 1965. The Margie Helm Library was named in her honor and dedicated on October 14, 1967. She died December 19, 1991 at age 97 and was buried in Fairview Cemetery in Bowling Green.