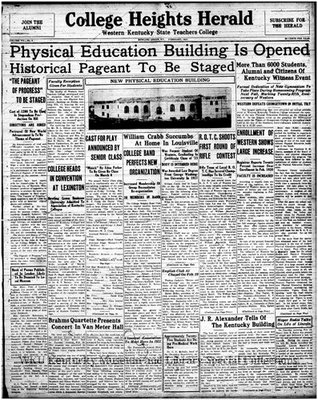 Article from the College Heights Herald regarding the opening of the Health & Physical Education Building and the first basketball game played there. Includes transcript of Henry Cherry's speech.

More Than 6000 Students, Alumni and Citizens Of Kentucky Witness Event

The largest gathering that ever attended an indoor athletic event at Western Kentucky Teachers College witnessed the opening of the new Physical Education Building on the evening of Feb. 9. In the feature event on the program the Hilltoppers swept aside the Tigers of Georgetown College to strengthen their hold at the top of the Southern Inter-collegiate Athletics Association by a 41-24 score.

More than 6,000 students, alumni and Kentucky citizens packed the building to capacity to be present for the splendid program arranged to celebrate the opening of one of the most magnificent Physical Education buildings in the South.

Addresses by President H.H. Cherry, members of the Board of Regents, and physical education faculty opened the program. He speeches were followed by demonstrations of stunts by students of the Physical Education Department.

President Cherry emphasized he fact that the formal dedication of the magnificent structure would note take place until next Homecoming in October 1931, at which time a mammoth three-day program will take place, to be known as Western’s twenty-fifth anniversary. A number of the greatest leaders and thinkers of America will be present at that time.

After the game the ushers conducted the people through the building, showing them the eight academic class rooms on the ground floor, the locker and shower rooms for Physical Education, which will accommodate between five and six hundred men and over six hundred women, with provision for additional equipment in the future. Offices and drill room for the R.O.T.C. are also provided for on the ground floor.

On the main floor the spectators witnessed some of the best equipment in the way of modern Physical Education apparatus that can be found. Four offices and a director’s room for the school of Health and Physical Education Departments, with examination and clinic rooms and four large Physical Education class rooms as well as a large amount of apparatus, complete with equipment. Twenty class rooms in all, are afforded, which greatly relieve the emergency need for class room space for instructional purposes.

Undefeated in seven starts, the Western Teachers christened the new Physical Education Building by completely annihilating the downtrodden Tigers. From the opening until the final whistle Western toyed with Georgetown, not allowing the Tigers to score a single field goal in the first half. In the second stanza Georgetown was able to collect several shots after Coach Diddle had [put his] second stringers into the game. Bland Coffman was he only man to play the entire game for Western.

Captain Turner Elrod and Bland Coffman were the shining lights of the game, collecting twenty-two of the Teachers’ scores. Unaccustomed to a large floor the Diddlemen worked the ball under the basket for well-timed crip shots. Cawthorne and Lancaster bore the brunt of Georgetown’s attack.

Starting his season by collecting 100 points in the first five games, Orlie Lawrence was not able to set the terrific pace that is characteristic of him. Two field goals were his contribution to Georgetown’s downfall.

Bobby Brown, the smallest man on the Teachers squad, turned in one of the best all-around floor games seen in Bowling Green this year besides garnering ten points to run Captain Elrod and Coffman a [?] race for scoring honors.

Incidentally Western has not lost an athletic contest since last fall when it lost the opening football game to Centre College. Coaches James A. Elam, W.L. Terry, and Director of Athletics Ed Diddle have charge of athletics. Coach Elam is assisted in football by Coach Terry, who also handles freshmen basketball. Mr. Diddle has complete charge of the pace setting varsity basketball team.

All of College Heights joins me in an expression of earnest appreciation for the presence of this great assemblage of people upon this occasion which marks the opening of the Physical Education Building. I desire to emphasize that this is not a dedicatory program, but a formal opening of this magnificent structure. This commanding Hill with all of the buildings on it will be dedicated next fall during Homecoming Week, at which time we shall put on a three-day program and will have with us a number of the great leaders and thinkers of America. The occasion will be known as Western’s twenty-fifth anniversary.

This handsome new fireproof building constructed of Bowling Green white stone is one of the most portentous buildings on the campus. The outside dimensions are 125 feet by 225 feet including three full floors and a sub-basement under the south end. The total floor area exceeds 80,000 square feet and provides room for an auditorium measuring 100 feet by 180 feet with two cross courts for basketball and one standard court 50 feet by 90 feet, in addition to seating 5000 spectators. Provision has been made for eight unusually fine academic class rooms on the ground floor, as well as the locker and shower rooms for Physical Education, which will accommodate between five and six hundred and well over six hundred women, with ample space for additional equipment in the future.

Offices and drill room for the Reserve Officers Training Corps with storage room for gymnasium apparatus, military supplies, drill grounds and other equipment are located on this floor.

The second floor consists of six fine well lighted class rooms in the two end wings with a spacious rest room a the end of the building.

On the sub-basement floor is located a large band practice room with band director’s office adjoining. All mechanical equipment has been installed for heating facilities in the event the swimming pool is constructed in the future. There is also a large storage room on this floor.

All mechanical equipment and gymnasium apparatus has been selected in keeping with the quality of the building and every item has been purchased only after the most careful consideration. Ample equipment has been supplied for the immediate needs with the intention of making additions as the demand for work in physical education increases and additional equipment becomes essential to this program.

With the twenty class rooms afforded in this building, the emergency need for classroom space for instructional purposes will be greatly relieved.

We realize that College Heights as well as this building belongs to a human stock company in which every citizen of this Commonwealth is the owner of a piece of stock. We also realize in opening it that it is our duty to sanctify it by hard study; by earnest work; by expressing its harmony, its order, its articulation, its sanitation, and its stateliness in our lives; by high life, high though, high ideals, and a noble service; by seeing to it that its nobility is not marred by a single mark on a single wall or desecrated in any other way; by making the beautiful sunrises and sunsets which we shall witness from this Hill, the rising of a soul in a world of promise and opportunity and the setting of a soul amidst the splendors of a life well lived; and by making this beautiful physical panorama that we shall witness form hilltop and from classroom windows, a spiritual panorama to be transmuted into life; and finally, through a patriotic use of things spiritual and things material, to unlock the door that confines an imprisoned self and allow a new and greater Commonwealth to step forth – a blessing to man, a servant of God.