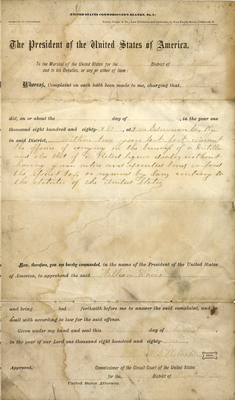 Warrant for the arrest of William Davis.

The President of the United States of America,

And to his Deputies, or any or either of them:

Whereas, Complaint on oath hath been made to me, charging that one William Davis did, on or about the ______ day of _______, in the year one thousand eight hundred and eighty & 81, at & in Edmonson Co., Ky. In said District, within two years last past, commit the offence of carrying in the business of a Distiller and also that of a Retail liquer [sic] dealer, without having given notice and executed bond, unpaid the special tax as required by law, contrary to the statutes of the United States.

Now, therefore, you are hereby commanded, in the name of the President of the United States of America, to apprehend the said William Davis and bring him bod___ forthwith before me to answer the said complaint, and be dealt with according to law for the said offense.

Given under my hand and seal this 13 day of August, in the year of our Lord one thousand eight hundred and eighty-one.

Approved, Commissioner of the Circuit Court of the United States