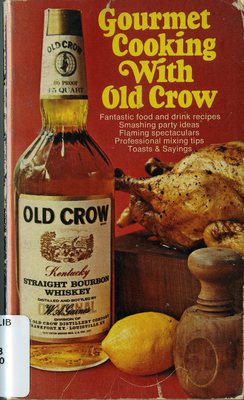 Old Crow was not named after a bird. It was named for a man, James Crow. Doctor James Crow. The professional title was not merely a courtesy in this instance. And it’s the key to understanding why this Scottish physician and trained chemist was the one to take Kentucky bourbon from a primitive brew to its present esteem. He was the first to use scientific instruments and controls in the art of making whiskey. He was first to use the sour-mash method. And he was first to introduce quality controls, guaranteeing the same fine bourbon, barrel after barrel – setting the standard by which all other bourbons would be judged. An article in The New York Times on September 9, 1897, described the situation faced by the talented Dr. Crow:

“At that time distilling was not accomplished by any regularly defined rule but rather after the old formula for bread-making; by taking a ‘passel of meal, a passel of salt and about so much water, biled down until it was done.’ By this process there were frequently days when good whiskey was made, but just as often the run, like the old woman’s bread, failed to produce the hoped-for result, the failure being invariably attributed to a change in the moon.”

Dr. Crow recognized this as an opportunity. Working with painstaking care of a dedicated scientist, he applied himself to developing “the perfect bourbon whiskey.” It took years, literally, but when Old Crow Bourbon was born in 1835, it was immediately recognized as the best anyone had ever tasted. This is not merely hearsay but a matter of record. Newspaper chronicles, personal letters, literature of the old times bear testimony to the exalted reputation of Old Crow. Men like Andrew Jackson, William Henry Harrison, and Kentucky’s own Governor Letcher publicly praised this superlative product. Senator Henry Clay is reported as riding far out of his way to meet Dr. Crow and order Old Crow Bourbon for his home in Washington, D.C. The celebrated Daniel Webster declared flatly that Old Crow was “the finest whiskey in the world.” The record is replete with accolades for Old Crow – President U.S. Grant, Mark Twain, Jack London, O. Henry, among many.

Every drop of Old Crow was a matter of pride with Dr. Crow, and every keg was boldly stamped James Crow’s Whiskey. More than a century has passed, but his hand and his spirit are still on the brand.

Toast – Here’s to the three great American birds. May you always have an eagle in your pocket . . . a turkey on your table . . . and Old Crow in your glass.

Toast – To Kentucky, where the ladies are beautiful and where the crop of corn is utilized for bourbon.

From Gourmet Cooking with Old Crow by Emanuel Greenberg, 1970.