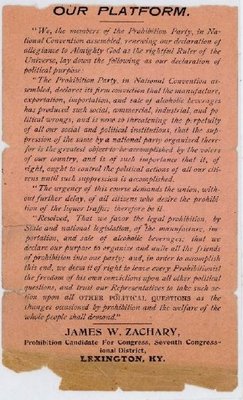 Our Platform - We, the members of the Prohibition Party, in National Convention assembled, renewing our declaration of allegiance to Almighty God as the rightful Ruler of the Universe, lay down the following as our declaration of political purpose.

The Prohibition Party, in National Convention assembled, declares its firm conviction that the manufacture, exportation, importation, and sale of alcoholic beverages has produced such social, commercial, industrial and political wrongs, and is now so threatening the perpetuity of all our social and political institutions, that the suppression of the same by a national party organized therefore is the greatest object to be accomplished by the voters of our country, an dis of such importance that it, of right, ought to control the political actions of all our citizens until such suppression is accomplished.

The urgency of this course demands the union, without further delay, of all citizens who desire the prohibition of the liquor traffic; therefore be it

Resolved, That we favor the legal prohibition, by State and national legislation, of the manufacture, importation, and sale of alcoholic beverages; that we declare our purpose to organize and unite all the friends of prohibition into one party; and, in order to accomplish this end, we deem it of right to leave every Prohibitionist the freedom of his own convictions upon all other political questions, and trust our Representatives to take such action upon all OTHER POLITICAL QUESTIONS as the changes occasioned by prohibition and the welfare of the whole people shall demand.