King to be Crowned for Coming Home 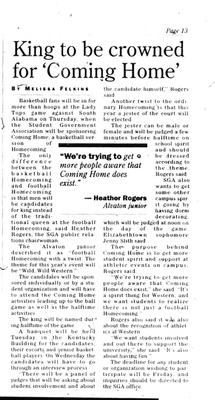 Basketball fans will be in for more than hoops at the Lady Tops game against South Alabama on Thursday, when the Student Government Association will be sponsoring Coming Home, a basketball version of Homecoming.

The Alvaton junior described it as "football Homecoming with a twist. The theme for this year's event will be 'Wild, Wild Western'."

The candidates will be sponsored individually or by a student organization and will have to attend the Coming Home activities leading up to the ball game as well as the halftime activities.

The king will be named during halftime of the game.

A banquet will be held Tuesday in the Kentucky Building for the candidates, their escorts and senior basketball players. On Wednesday the candidates will have to go through an interview process.

"There will be a panel of judges that will be asking about student involvement and about the candidate himself," Rogers said.

Another twist to the ordinary Homecoming is that this year a jester of the court will be elected.

The jester can be male or female and will be judged a few minutes before halftime on school spirit and should be dressed according to the theme, Rogers said.

SGA also wants to get some other campus spirit going by having dorm decorating, which will be judged at noon on the day of the game. Elizabethtown sophomore Jenny Stith said.

The purpose behind Coming Home is to get more student spirit and support at athletic events on campus, Rogers said.

"We're trying to get more people aware that Coming Home does exist," she said. "It's a spirit thing for Western, and we want students to realize there is not just a football Homecoming."

Rogers also said it was also about the recognition of athletics at Western.

"We want students involved and out there to support the university," she said. "It's also about having fun."

The deadline for any student or organization wishing to participate will be Friday, and inquiries should be directed to the SGA office.