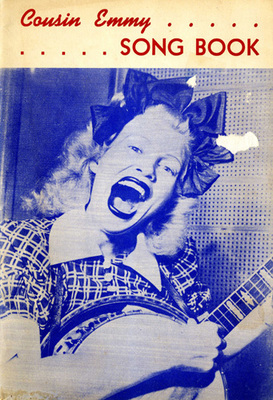 Cousin Emmy's songbook includes a brief biographical sketch, several photographs of her performing, with children at her kiddie show and members of her family and song lyrics. Songs included are:

3. I'll Be True to My True Love - Scat Tom Kittypuss, Your Tail's in the Gravy

5. A Message to Heaven

6. Pretty Little Miss in the Garden

7. I Love My Rooster

8. Cat's Got the Measles and the Dog's Got the Whooping Cough

Born into the musical Carver family of Barren County as Cynthia May, Cousin Emmy became well known for her music. She recorded with Decca in the 1940s and got a radio show on Louisville's WHAS radio. As the show grew in popularity she was able to move to St. Louis where Cousin Emmy appeared on KMOX. Carver also made it to Hollywood and into films such as Swing in the Saddle.