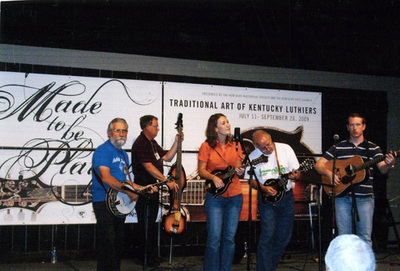 Arthur Hatfield and Buck Creek, playing at Made to be Played exhibit at the Kentucky History Museum.

The original members of Buck Creek were Arthur Hatfield, Gary Minor, Jimmy Railey and Johnny Day. They formed the band in January 1994 and had a recording out by May. When Raily moved to Alabama, he was replaced by Ricky Burch. Eventually Amanda Everett joined the group.

Most of the members are from south central Kentucky. Gary lives in Cave City, Johnny grew up in Caneyville, Ricky is from Brunswick, Georgia and Amanda comes from Finney.