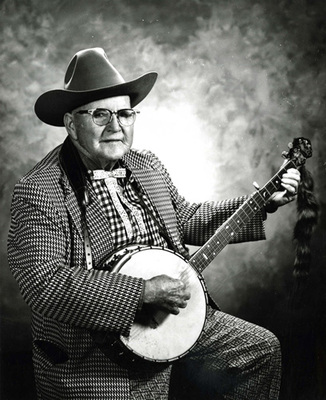 Nobel Carver aka Uncle Bozo with his five string banjo.

The Carver family of Kentucky were musically prolific. The most famous member was Cousin Emmy. Nobel, generally referred to as Uncle Bozo was Emmy's second cousin. He began performing at the age of 11 and was on the road by age 17 with his two brothers.

The group received a contract with Paramount Company in 1922. They cut a record of which included renditions of the Wreck of the Old 97, Log Cabin in the Lane, Whang Whang Blues and Timbrook and Molly.

Uncle Bozo joined the Grand Ole Opry in 1932 and traveled with several touring Opry groups. In the 1950's he could be heard on Glasgow's WKAY radio. In order to make ends meet, Carver often worked other jobs such as managing hotels or selling insurance.