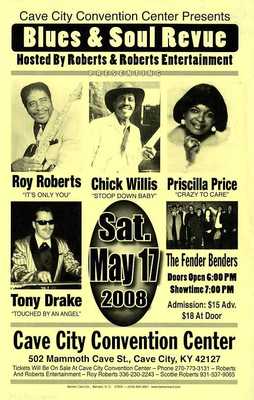 The locally based R&B group The Fender Benders are on the bill with nationally known blues and soul artists.

Blues artist Roy Roberts is a Tennessee native residing in Greensboro, North Carolina has been recording music since the 1960s.

Robert Willis aka Chick is an R&B singer who worked with his cousin, the late Chuck Willis.

Charleston, West Virginia native Priscilla Price made her way to the Apollo Theater in New York where she worked with the Leo Price Orchestra.

R&B singer Tony Drake was born Samuel Garner in Philadelphia and raised in Virginia. He returned to Philadelphia at age 15 and then to New York to pursue his solo career.