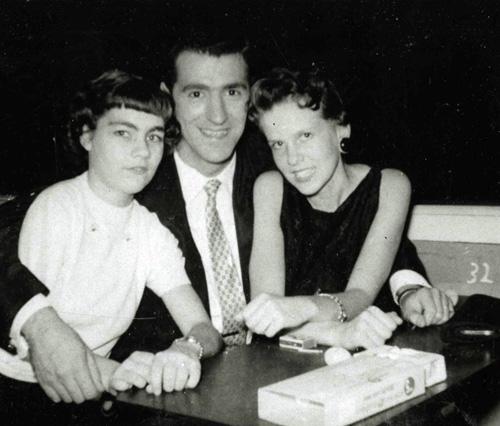 Forever for the Four

"I started a Hilltoppers fan club, and the day that package of membership cards, autographed glossy eight-by-ten photographs and buttons (I AM A HILLTOPPERS FAN) arrived seemed like the turning point of my life."
~Bobbie Ann Mason, Clear Springs

In 1954, fan club members established their winter uniform as consisting of a red sweater with large white "H", white collar, gray slacks or skirt, and a Hilltopper beanie (available for purchase from Western's Supply Store). Snapshots of The Hilltoppers on Western's campus and on the Ed Sullivan Show were available at a cost of 10 cents.

When military service kept the boys from plugging their own records, the Hilltopper-ettes wrote to all fan club presidents: "it is left up to the Fan Clubs and we must work doubly hard in order to make each release a hit. The HILLTOPPERS are counting on our loyal support, and we don't want to let them down."

By 1957, National Fan Club President Bobbie Annie Mason wrote and mailed a newsletter to three hundred club chapters. The Hilltoppers were indeed fortunate to have loyal fans that persevered through both The Hilltoppers constantly changing circumstances and their own adolescence. Their devotion was unchanging, or as Millie Hovizi, one of the Detroit club presidents, so aptly put it "forever for the four."

In her memoir Clear Springs, Bobbie Ann Mason wrote vividly of the evening she met The Hilltoppers at Castle Farms Ballroom:

"Their sound was principally Jimmy Sacca's lead backed up with a simple 'doo-wah' harmony. In their sweaters and baggy gray flannels, they swayed from side to side in unison, sort of like cheerleaders."

"Only You" stayed on the British Best Selling Pop Records list from January to June 1956, paving the way for The Hilltoppers' ten-week tour of England that summer.