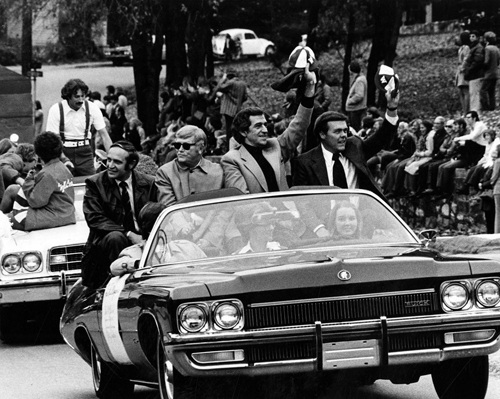 Memories of the Hilltoppers 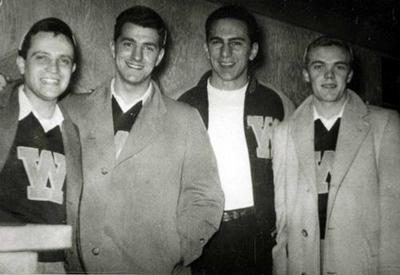 Having arrived at Western in the fall of 1950, a fellow northerner, then in scarce supply, invited me to room with him temporarily – Jimmy Sacca. This temporary invitation lasted two years produced memories and friendship that have lasted a lifetime.

Living with Jimmy, my education was about to begin. In the course of events that followed, we had an immediate bonding. Little happened thereafter that excluded the other. Jimmy was like no man I had ever met – ever.

From our first day, it was apparent that my new roommate had a talent for singing that, beyond imagination, would spread from our room to the world. Anywhere that we went, Jimmy would, with the slightest invitation, entertain. I had a daily dose of Blue Moon, Moon Over Miami, and Sunny Side of the Street; these songs and others soon became campus favorites and Jimmy's talents quickly spread into the community.

Jimmy's first "major" appearance occurred during the spring of 1950 when the "Follies" was presented at Western to exhibit the various talents of the students. Jimmy brought the house down (and I heard my songs once again.)

On one early occasion, the Vaughn Monroe orchestra was in town. Jimmy's itch to sing became very apparent. I took the liberty of telling Mr. Monroe that we had a special singing talent present and asked if he could sing. When the event was over he received rave comments from Mr. Monroe saying that his talent surprised him.

During the late Fall of the next year, we had decided to invite ourselves to the very private Boots and Saddle Club; this event changed Jimmy's life forever. Sneaking in through the kitchen, we mingled among the crowd. The Ace Denning orchestra was playing. The piano player, who I later learned, earned $10.00/evening was Billy Vaughn. Naturally, our regular routine prevailed and Jim was invited to sing; he and Billy retired to the kitchen for a five minute "rehearsal." Jimmy captivated the patrons (and I got to hear my songs again). Jimmy was invited back; the next week, we entered through the front door. Jimmy sang once again. After this first medley, he was approached by Billy Vaughn who held in his hand a song that he recently had written. Again they retired to the kitchen to "rehearse" and then it happened – TRYING was born and instantly, beyond their wildest dreams, new careers were launched (I finally got to hear a different song). Jimmy became a fixture there and we were even provided with food.

Soon, a local disc jockey, Bill Stamps, popular with the college students, heard Trying and asked if he could record and play the song during his program. It became so popular that he would play it several times each evening – with this panacea, who could have hoped for more.

But much more did come. Bill Stamps took the liberty to send the tape to Dot Records, a then small country western mail order record house in Gallatin, Tennessee; word came back that they were interested in recording Jim on record for distribution. Waiting for the call seemed like an interminable period and hope began to diminish. Three weeks later, a call came in that on a Thursday night in late April, Dot would be there to record.

Jimmy needed additional singers for the background and quickly assembled Seymour Spiegelman (tenor) and Don McGuire (bass). Billy Vaughn would be the forth vocalist and the piano player of course. The Hilltoppers were born.

Permission was received to use Van Meter Auditorium for this session. We were expecting a studio orchestra and recording technicians. Present that night however, were the four Hilltoppers, the two owners of the company with a small portable recorder, and myself. The finances were so threadbare that the bass fiddle would be dubbed in later at the studio. Halfway through the session, the subject of an appropriate name for the group arose. Every imaginable combination was suggested and it was quickly agreed that they would become "The Hilltoppers," and employ a collegiate theme; school letter sweaters and beanies would be emphasized. (My dear friend Seymour, because of finances, borrowed my letter sweater and beanie.)

Since I had zero singing ability, my important contribution was as the "Go Fer." I had the very important duty to transfer equipment, go fer sandwiches, locate various needed supplies and "technically assisted" Billy Vaughn with his piano playing (the soft pedal was broken on the piano and he requested that I lay there with my head on my book to hold the pedal down. On many occasions he stated that my name should have been on the back of the label to compensate me for my contribution.

Shortly thereafter, the record was complete and was being played constantly in the local area. Who would have ever dreamed that close to a million copies would be sold and the Hilltoppers would go on to become the most popular singing group in the country. They were on their way.

Almost immediately, touring began. One of the first engagements they had was at a nightclub in Pittsburgh, my home town. To preserve finances they slept on my living room floor.

After 6-7 months, the talents of Billy Vaughn were recognized and he became studio arranger for the expanding Dot records which later sold to MGM with Billy part of the deal. He soon became head of the MGM studio orchestra. His accomplishments will forever be enjoyed.

The rest was history. Western got the Hilltoppers, I got to hear many, many, new and beautiful songs, and Jimmy had his stroll on the "sunny side of the street."