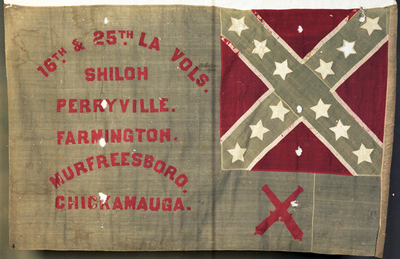 Note: Prior to December 1862, the 16th & 25th Louisiana Infantry regiments fought under separate leadership, although sometimes on the same battlefield such as Perryville, Kentucky. The combined regiment fought in campaigns from Murfreesboro to Atlanta with its losses at Chickamauga at 35%. This flag is similar to one carried by Austin's Battalion, Louisiana Sharpshooters and is perhaps one of several made in Mobile, Alabama, in 1864 for units in Gibson's Brigade, Army of Tennessee.