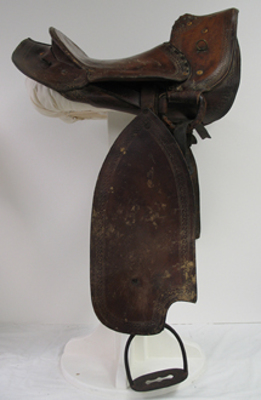 Leather saddle. Geometric tooled design around the edges of the skirts, fenders or saddle flaps, and around the pommel. The near side stirrup is missing.

Donor was given saddle by his grandfather, William Harvey Roark who had served under Gen. John Hunt Morgan. Mr. Roark served as a pallbearer at Gen. Morgan's funeral and was given the saddle. He passed it to his grandson.