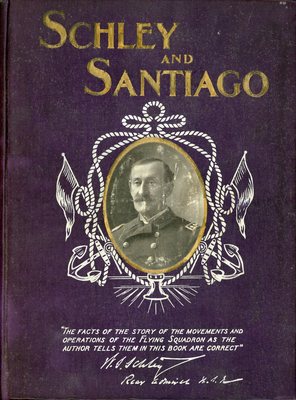 "Schley and Santiago" (Chicago, Ill.: W. B. Conkey Co., 1902), being an "historical account of the blockade and final destruction of the Spanish fleet under command of Admiral Pasquale Cervera, July 3, 1898." Chapter titles include: Taking Command, Man and Hero, Preparation, Off to Sea, Clear for Action, Off Cienfuegos, Coaling, A Will-o'-the-Wisp, Finding the Fleet, Reconnaissance, Hobson's Exploit, An Escape, The Bombardment, The Blockade, The Troops Arrive, Before the Battle, The Enemy is Escaping, The Viscaya, Chasing the Colon, The Commander-in-Chief, Schley in Battle, Personal Bravery, Schley's Story, A Wonderful Chase, The Spanish Ships, Victor and Vanquished, and Closing Incidents. This book is available for use in Library Special Collections at Western Kentucky University; 270-745-6434; mssfa@wku.edu