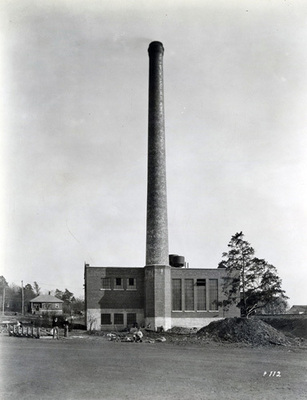 The plant is located on the lower end of campus next to the railroad tracks. After the plant was built, every building on campus had an even temperature. When it was first built, the plant contained two 200 horsepower water tube boilers. In 1930, a 400 horsepower boiler was installed.

Additions:
1938 - $40,000 donated to modernize and expand heating plant; "The contemplated project includes the installation of a reconditioned boiler with new automatic stokers, the laying of a steam pipeline to the new music building, and the construction of an "indicted draft" system for the plant's smokestack." [Heating Plant on Western Campus to be Worked On, 6-20-38]

1957 - $120,000 new boiler installed. The boiler eliminated fly-ash and soot. The new boiler supplied five more buildings on campus than before.