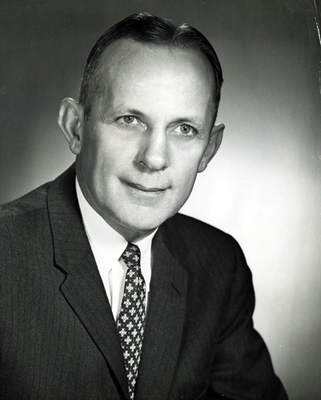 During his final illness, as he continued to deal with some college business, President Paul Garrett referred to his assistant, Kelly Thompson, as "my eyes, legs, and ears." Thompson carried much of the administrative burden that Garrett found irksome even before his illness and from 1953 on Thompson provided much of the leadership for the institution. On March 26, 1955, the regents made him acting president until a successor to Garrett was named, and instructed him to move forward with projects to alleviate yet another housing shortage.

Thompson had strong support for the presidency. Unlike Garrett, he had long and close ties with the school, and he was thoroughly conversant with its people, its operations and its traditions. No one could question his loyalty and devotion to Western. Josephine Cherry Lowman wrote Regent Bartlett, "Although my Father never said it to me in so many words, I always felt that he was grooming Kelly for the Presidency of Western for some future date and hoped that this would happen some time." Another strong Thompson supporter was Coach Diddle who waged an active campaign with Governor Lawrence Wetherby and the members of the Board of Regents.

Yet there was opposition. Some people objected to Thompson's religion. There was still a general belief that a Catholic could not be elected president of the United States, and some detractors extended that prohibition to the presidency of Western as well. More opposition centered around Thompson's lack of a doctoral degree and full-time teaching experience.

There was no organized search for presidential candidates and few formal applications for the position. A number of people were recommended, including Kelly Thompson, but he did not formally apply. "I was here," he later explained. "I was my predecessor's right arm, so to speak. The people who would make that decision knew all about me. It seemed ridiculous for me to apply."

When the regents met in executive session on October 17, they considered seventeen names. The vote to elect Thompson was 3 to 1. Thompson was voted a four-year contract at nine thousand dollars, the maximum then possible.

"I love this college with a passion," Kelly Thompson said in accepting the position. "I have been employed here 26 years and all that I have I owe to Western. I pledge to you men that you will never have any reason to regret your action I shall never allow myself to be a part of anything that will reflect discredit on this institution." When the new president left his office that afternoon, the rotunda was packed with students who sang For He's a Jolly Good Fellow and gave him a five-minute ovation. "As long as I am president of Western," he responded, "we will never be satisfied with anything but the best for the college."