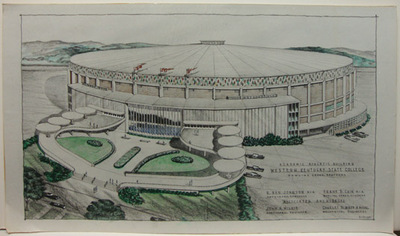 Namesake - E.A. Diddle:
Edgar Allen Diddle was born at Gradyville, Kentucky March 12, 1895 to John A. and Mary Elizabeth Hughes Diddle. After his early education at Columbia, Kentucky, Diddle entered Centre College at Danville in 1915 where he excelled in football and basketball. He served in the Naval Aviation program during WWI, returning to Centre in 1918. He left again in 1920 to begin his coaching career at Monticello High School. In 1921 he coached at Greenville High School. On September 7, 1922, he joined the staff at Western as athletic director and coach of all sports. He relinquished his duties as head football coach in 1929 and of baseball in 1956.

Col. Edgar B. Stansbury (1906-2009). The Diddle Arena lobby was named for Col. Stansbury in 1998 after he pledged $1 million for scholarships. Stansbury came to Western in 1926 and played football, basketball and baseball under Coach Diddle. He later returned as an assistant coach for football and baseball and served three seasons as tennis coach going on to serve as director of athletics and head of the Health & Physical Education Department. He was inducted into the Athletic Hall of Fame in 1994.

Building History:
Discussion and planning for Diddle Arena began as early as 1956. By December 1960 plans had been drawn. Between 65 to 70 percent of the construction was funded through the sale of bonds with the remaining capital coming from the state. When the building was first designed, it included the basketball arena, a swimming pool approximately 72 x 42 ft., an auxiliary gym, 30 classrooms, offices, shower, locker and equipment rooms. The building was 3 stories high and was equipped with 3,344 theater-type seats and 3796 permanent bleachers. However, the seating capacity was 13,000. At the time, Diddle was the 3rd largest building on campus behind Cherry and the Science Building.

A bulldozer was used for the groundbreaking on November 15, 1961 and the arena was dedicated on December 7, 1963. The Hilltoppers lost to Vanderbilt 82-60 in the opening game. In 1991 an electrical fire broke out. Several students attempted to douse the blaze. Seventeen students, firemen and WKU employees were checked for possible asbestos contamination.

When it was first constructed the arena housed the departments of Foreign Languages, Military Science and Physical Education.

"WKU Athletics Shift Grows: All But One Regent Give OK to Deeding Facilities to City," May 7, 2001

"High, Not Dry: Tenants of WKU’s Pricey Skyboxes Can Have Alcoholic Beverages on Hand," Feb. 24, 2001

"WKU Construction on Track to Finish Before School Starts," July 5, 2003

Articles speculating on the replacement of Diddle Arena