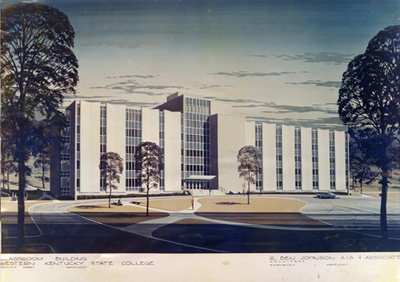 Namesake:
Finley C. Grise was born in Lewisburg, Kentucky on February 1, 1886. He earned his B.S., M.A., and Ph.D. degrees from George Peabody College for Teachers. He earned the Life Certificate at WKU. He was a teacher for the Logan County schools. In 1913 Dr. Grise came to Western as a teaching assistant in English and Latin. In 1918 he was appointed head of the Latin department. In 1927 he became chairman of the Curriculum Committee and in 1932 was named Dean of the College and head of the Foreign Languages department. During his long career at Western he was recognized as an outstanding educator and as a leader in Kentucky's higher education development. [Peaks of Progress, 1967]

History:
Grise Hall was once used to accommodate the departments and offices of the Bowling Green College of Commerce and some of the offices for the departments of Education and Psychology. The 5 story building has an office wing, a classroom-laboratory wing, and an auditorium lecture extension. It has 65 classrooms, 159 offices for faculty and staff, an auditorium that seated 450, and 14 laboratories. [Peaks of Progress, 1967]