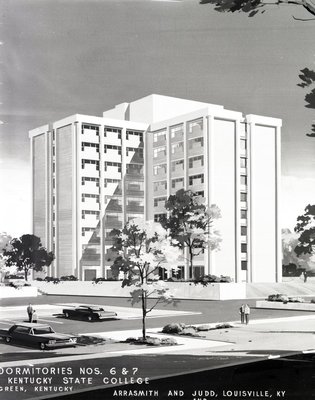 Namesake:
Bemis Lawrence served as Vice-Chairman of WKU's Board of Regents from 1955 to 1966. He was born December 1, 1914 in Tompkinsville, Kentucky. Lawrence received his A.B. degree from Western in 1936 and earned his Bachelor of Laws degree in 1940 at the University of Louisville. He served as county commissioner of Jefferson County Fiscal Court, president of the Louisville Bar Assoication and taught real estate law at the University of Louisville. Lawrence also served as an administrative assistant to J.Edgar Hoover in the FBI during the 1940s. He died August 21, 1975 while boating on Lake Cumberland.

History:
Constructed in conjunction with Barnes-Campbell. Bemis Lawrence was dedicated on October 14, 1967. The 9 story men's dormitory was equipped with air-conditioning, self-service elevators, a spacious lobby and waiting areas, and apartments for a director and an assistant director. Bemis Lawrence housed 392 men. Each room accommodated 2 students.