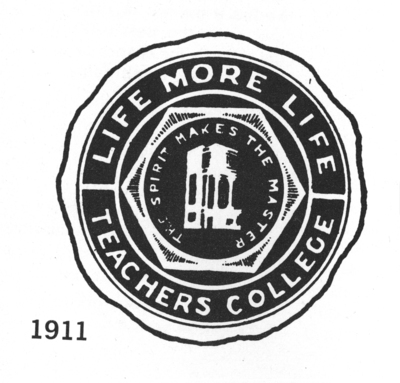 Julia Franklin designed the seal to be used for the Class of 1911's class ring. It was approved by Henry Cherry as the official seal of the college. It features the ground-level archway beneath the facade of Van Meter Hall in the center. Around it is the statement "The Spirit Makes the Master" used by Henry Cherry at chapel programs and in conversation. The outer circle bears the motto and school initials: Life More Life WKSNS. This seal was used until 1948.

Life more life is a paraphrase from the Bible:

John 10:10 The thief cometh not, but for to steal, and to kill, and to destroy: I am come that they may have life, and that they might have it more abundantly. (King James Verson).

Cherry used it in the sense that WKU was training teachers so the children of Kentucky would have a better life through education. The phrase became the tag line for radio programs broadcast from WKU in the 1930s.

There is no identifiable source for the motto The Spirit Makes the Master. The exact date that Cherry used either of the phrases is unknown. It was probably during chapel which was held daily at WKU and possibly in chapel at the Southern Normal School that pre-dates WKU.