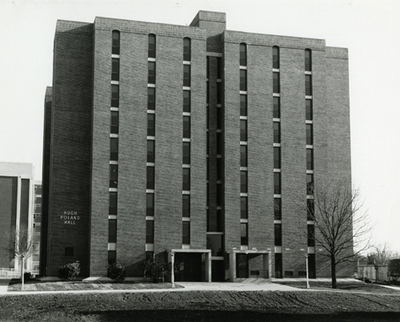 Namesake - The dormitory was named after Hugh Poland who was a member of the Board of Regents from 1957-1969. The Tomkinsville native graduated with the WKU Class of 1934. He lettered in basketball, baseball and football. Poland went on to play major league baseball with the San Francisco Giants, Cincinatti Reds, Philadelphia Phillies and Boston Braves. Afterwards he became a manager and scout for the San Francisco Giants.

History - The nine story building housed 440 students. It was first used as a men's dormitory. It was 79,461 square feet and had air-conditioning, an apartment for a dorm director and an assistant director and also a lounge. Beginning in the fall semester of 1979, the dorm was an all-girls dorm. In 1985, the dorm was converted into co-ed where women lived on floors 2-6 and men on floors 7-9. In the fall of 2004 the dorm went to back to women only.