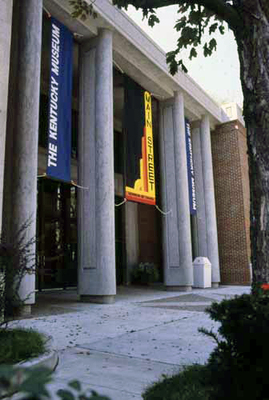 The Kentucky Building reopens after $2 million renovation and museum addition.

Bowling Green, Ky. -- The Kentucky Building on the Western Kentucky University campus is about to reopen its doors to the public, following extensive renovation and expansion.

Kentucky Building officials have chosen the patriotism and flair that traditionally accompanies Friday, July 4 in our nation's heritage to rededicate the building which was originally completed in 1937 and today is two and one-third times its original size. The new Kentucky Building offers library facilities and museum exhibits of statewide significance to its visitors.

Opening ceremonies will be held at 10 a.m. (CDT) and following the program, hourly tours have been scheduled throughout the building for the remainder of the day, according to Anne Johnston, a member of the Kentucky Building staff.

After Friday, Kentucky Museum and Library regular hours will be Tuesdays through Saturdays from 9:30 a.m. to 4 p.m. and Sundays from 1 to 4 p.m. The building will be closed Mondays and all university holidays.

The new Kentucky Museum features many exhibits, designed for persons of all ages, says Ms. Johnston.

For example, currently there are eight featured exhibits ranging from a photographic display about Main Street in historic Bowling Green to a how-to exhibit about downtown, to an exhibit called "Newtown," an architectural experience for persons under 18 years old, says Ms. Johnston.

Another attraction is the School Gallery, which features rotating exhibits from public schools.

The new Kentucky Building also features a Museum Store which will be open during regular museum hours, says Ms. Johnston.

The library portion of the Kentucky Building was reopened last July, and it offers research facilities of genealogy, Kentucky history, rare books, manuscripts, maps and photographs. In addition, items from collections of special interest are often exhibited in the library areas, says Ms. Johnston.

The $3 million structure features a new addition of four floors, located to the rear of the existing building and visitors will now enter the Kentucky Building on the north side of the new addition.

Looking from inside the old structure to the new addition, the original building is reflected in its picturesque beauty on a mirrored glass wall of the new section, and the garden, which was to the rear of the old structure, still remains. [WKU Press Release 6/27/1980]