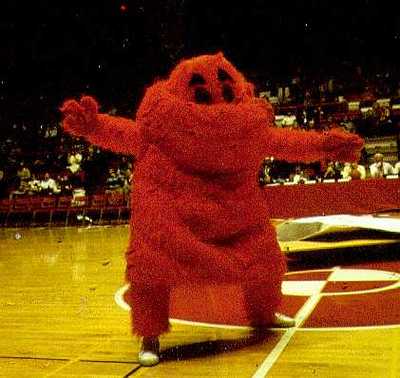 Big Red was conceived in the fall of 1979 in the mind of Ralph Carey. Ralph created a suit based on amusement park characters. Big Red has been the Hilltopper mascot since December 1, 1979.

Date: 12/8
Subject: Attached
To: Gibson, Ransdell, Beck, Just
From: Fred Hensley
(x) For your files
(x) For your information

Remarks: Enclosed is a copy of the narrative submitted with the patent application. Thanks for your help.

THE CREATION OF WKU'S "BIG RED"

In September, 1979, a small group of administrators at Western Kentucky University were casually discussing the peculiar problem that the University had in not having an established school mascot. Essentially, that conversation centered around Western's successful athletic traditions, especially basketball, and how important the total University image is to keeping these traditions. The athletes and coaches had always been high in ability and character, the cheerleaders were talented and attractive, the students and fans were most supportive and seemed to thrive on the "red towel" symbol that had been established by the legendary Western Coach, Ed Diddle. But yet something was missing.

You see, folks at Western Kentucky University are known as the Hilltoppers; a unique and appealing nickname especially in light of the lofty terrain of the Bowling Green, Kentucky, campus. But have you ever tried to figure out just what a "Hilltopper" might be? Many have tried. On several occasions the University experimented with some rather interesting variations of what could be interpreted as a Hilltopper. But none of these characters seemed quite right.

It was during this early Autumn discussion that a decision was made to attempt to create a totally new mascot that might not necessarily be considered as the Hilltopper but rather as a new athletic spirit symbol. The fans still needed to wave their red towels, but the University wanted to provide an additional element of color and excitement that would not only motivate crowds but entertain them as well.

Two administrators, one from Student Affairs and one from Alumni Affairs, took the initiative (under the prompting of the fiery new Basketball Coach) to explore and create such a mascot. Dozens of creatures were studied, sketches were made, but nothing seemed quite striking or sophisticated enough.

It was at this point, in mid-September, that a senior business major from Cincinnati was asked to lend his talents. Ralph Carey had worked at King's Island Amusement Park for several years and his job emphasis was in the area of live shows. He knew how the Hanna Barbera animated characters were built and maintained. He also knew how to wear and manipulate the costumes to excite a crowd or thrill a child.

Ralph was made familiar with the situation and then turned loose to dream up a character that would be appropriate to Western. After much thought and a few days of sketching, Ralph presented what he thought was a good idea. The nature of his drawing was totally unexpected. Ralph had sketched a plump, fuzzy, round, red creature that was distinguished by a huge mouth capable of smiling, frowning, and eating anything smaller than a breadbox. It could also maneuver with relative eases yet still use its arms and legs to express itself. It seemed perfect.

It was decided that this just might be Western's new mascot. But what will its name be? Only one name came up. It had to be just simply "Big Red." Big Red was born on September 21, 1979.

Ralph Carey then proceeded to design a costume that would physically and mechanically fit his sketch. He determined what materials were needed and how much his creation would cost. It was at this point that Ralph, Ron Beck, assistant dean of students, and Gary Ransdell, associate director of alumni affairs, presented the concept to the President of Western Kentucky University, Donald Zacharias. With the President's approval, the project was jointly and equally financed, at a cost of $900, by the University, the Athletic Department and the Alumni Association. On October 4, 1979, costume materials were ordered from Hanna Barbera Productions in Los Angeles, and actual construction of the outfit began.

Big Red was introduced to the public on December 1, 1979. The setting was the first home basketball game of the 1979-80 season. The crowd numbered 10,300. Prior to the game, as the teams left the floor for their last minute strategy talks. Head Basketball Coach Gene Keady was called to center court by Santa Claus. Everyone in the arena wondered what was in the big white box decorated with a huge red bow. Without hesitation, Santa wished Coach Keady a Merry Christmas and presented Western fans, friends and foes with "Big Red."

In the ensuing year this lovable furry creature has captured the hearts and imagination of all Western students, faculty, alumni and fans. Big Red has made subdued crowds roar, and he (it appears to be a "he" although that has never been documented) has made hostile crowds docile. He has thrived on a steady diet of footballs and basketballs (in season of course), and he's put a sparkle in many eyes both young and old.

Big Red is a hit. The secret to his success might be in his ability to smile or frown, to laugh, to conform his face and body to accommodate a particular situation or emotion. He is unique. He has become a symbol of Western Kentucky University. Requests for personal appearances are endless, commercialization has become commonplace. A new costume has been professionally built and tryouts have been conducted to see who would portray Big Red in 1980-81. Big Red is here to stay!