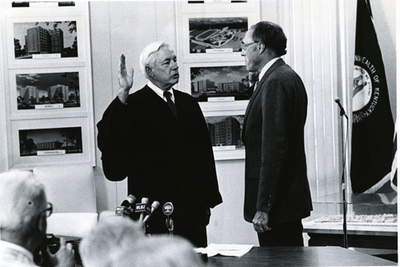 Donald Zacharias being sworn in as WKU's sixth president. Zacharias was an energetic forty-three-year-old when he assumed office. Tall, balding, and articulate, he wore glasses and had a penchant for brown suits. A native of Salem, Indiana, he received the B.A. degree from Georgetown (Ky.) College in 1957. After a year as a high school teacher, he enrolled in the graduate school at Indiana University and earned his M.A. (1959) and Ph.D. (1963) degrees there. His terminal degree was in speech communications with specialties in communications and conflict management, communication and social change, and organizational communication; his minor area was American history. A graduate teaching assistant at Indiana University, Zacharias joined the faculty there in 1963. In 1969 he moved to the University of Texas at Austin as an associate professor, and in 1972 he was promoted to professor. He won teaching awards at both Indiana and Texas, but Zacharias became involved in University administration in 1974 when he became assistant to the president of the University of Texas at Austin. When selected as Western's president, he was executive assistant to the chancellor of the University of Texas system. [Harrison, Lowell. Western Kentucky University, p. 264]