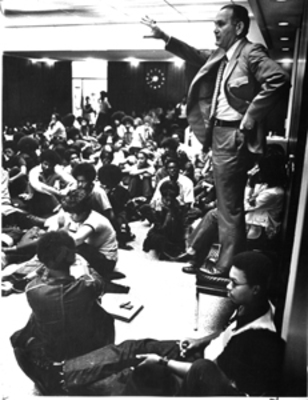 Dero Downing addressing student protesters in Wetherby. The lack of black cheerleaders became one focal point of discontent. Mrs. Charles E. Ford of Louisville wrote President Downing in the spring of 1971 that she was going to contact the National Association for the Advancement of Colored People because Western had no black cheerleaders although most of the starters on the basketball team were black. Downing replied that her complaints were quite similar to those he received because so many of the basketball players were black. "in either instance, he added, "such an attitude is evidence of misunderstanding and lack of information and perhaps a degree of prejudice as well." After naming several black students who occupied leadership positions on campus, he invited her to visit Western and become more knowledgeable about the school. Black student Larry Pruitt in a letter to the College Heights Herald chided fellow blacks for their behavior during the playing of the national anthem and their refusal to cheer during games. "With five black athletes starting, I have something to cheer about," he asserted. "If there is any prejudice within the basketball team, it certainly isn't shown within the statistics." On the morning of September 10, 1972, some 250 blacks staged a peaceful sit-in in the lobby of the administration building to demand that a second black be added to the cheerleading squad. The regents had added three cheerleaders, one of them black, to the six-woman squad the previous week. The protesting students left a path open, but Downing, who spoke to them in the lobby, declared, "This university is not going to be disrupted and what has happened here is disruption." But he met with a delegation of five in his office, consultations were held with Dean Charles Keown and other interested parties, and a second black cheerleader was added to the squad over the protests of the elected cheerleaders. "We are willing to try to make it work," the squad captain was quoted, "but we felt it was wrong." The mode of selection was later changed from popular election to try-outs before judges. [Harrison, Lowell. Western Kentucky University, p. 236]