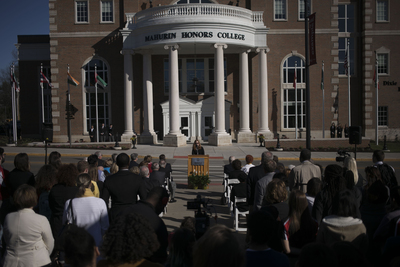 Building History:
Plans for the new Honors College facility were announced on October 2012. The new facility would be situated on Normal St., where the Sig Eps and Chi Os fraternity houses were removed from. The reason was for a new center was that Honors College had outgrown their old house after more than a decade. In addition, the new center would house the Office of Scholar Development, Flagship Chinese Program, Study Abroad and Global Learning, and other foreign travel and language-related programs. Features would include classrooms, an office, balcony, computer lab, commons area, café for international cuisine. It was also hoped for the building would receive a silver certificate of LEED.

On January 10th, 2013, while WKU was in negotiations with the fraternities moving off Normal St., then-KY. Governor Steve Beshear announced a plan to allow Kentucky universities issue agency bonds as a method of funding campus improvement project. According to Ransdell, the Honors College was one of the 11 projects from six universities "included in one agency bond package." He expected the General Assembly to approve all the projects during the spring of 2013. Beshear signed the agency-bond law on Thursday, February 20th.

Before construction began, Normal Drive had to be acquired by WKU from Bowling Green, which did so on February 19th. There was concern about the safety of pedestrians that the new facility would increase further, since many were already crossing the road to Ransdell Hall. In the summer, the speed limit would be reduced to 15 mph to ensure rigid safety. The Board of Regents OK'd Ransdell's authority to purchase 1580 Normal Drive for $240,000 near the end of the spring semester.

Although the gravel parking lot on Normal Drive was closed in February 2014, construction could not begin until bids from contractors were received. Paducah-based A&K Construction won the $14.7 million contract to begin construction in early March. By September 2014, construction was still in the steel-frame phase, but the building was expected to be completed July 2015 and open in the fall of the same year.

Unfortunately, construction had not been finished by July: while the main building was basically done, the front entrance was still being worked on. The four-week delay was blamed on the past winter, which made it difficult to move the project forward. Still, a limited number of classes on the second floor were held at the beginning of the fall semester, while access to the entrance, restrooms, and elevators was available. More details about the features were provided via email by President Ransdell: 11 classrooms, 12 small study nooks, 86 offices, a 200 seat multipurpose room, an outdoor event lawn and a student community kitchen. The building would also house 10 departments: among those the aforementioned Chinese Flagship, Study Abroad and Global Learning, and the Office of Scholar Development.

By early October, even though the building was still not yet done, the departments had begun moving in ahead of time. However, construction was wrapping up with the finishing touches. On Friday, October 23rd, 2015, the Honors College/International Center was officially dedicated.

Namesake:
The Honors College/International Center was renamed in honor of WKU alumni Peter and Felix Mahurin for their philanthropy over more than four decades by the Board of Regents on Jan. 27th, 2017.