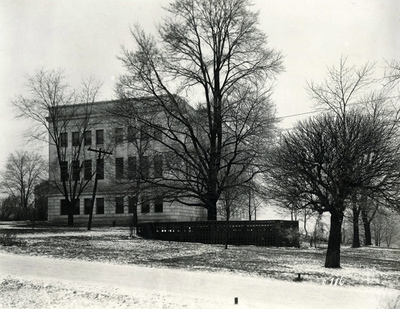 Small wooden structure where students met between and after classes. Generally a place where couples could rendezvous located in front of "Old Potter Hall" on the site of the current Cherry Hall.

The second spoonholder was a large octagonal concrete structure with seats around a tree and around the outer rim, built on the site of the first. It was estimated to seat approximately 100.

Before the Goal Post became the mecca of idle students, people who had neither the time nor the energy to go to the bottom of the hill and back found the "Spoonholder" a convenient and popular place to meet for discussing current happenings and for courting. The "Spoonholder" was torn down to make room for Cherry Hall. "[1949 Talisman, p. 7]

The current [2008] "Spoonholder" is a terraced seating area just across the drive from Gordon Wilson Hall and Van Meter.

Not a breath profaned the solemnity of the sacred occasion. A pin dropping on the grass could have been heard as Dr. Soloman [sic] ceremoniously broke a bottle of rare old milk (aged in wood) on the spick and span spoonholder.

The multitude cheered frenzily and went wild after Dr. Soloman [sic] had broken this rare vintage on the hull of the remodeled old Ship of Matrimony Causes, "S.S. Spoonholder."

The "S.S. Spoonholder" after being put back into shipshape condition, launched forth anew on its career with Admiral Louis B. Soloman [sic] at the helm. The newly-created admiral (not on the Governor's staff, however) has issued a call for recruits but as in the days of Noah, the crew must enlist in pairs.

The crowd, variously estimated from 500 to 50,000 hung on every word from the announcer, as he vividly pictured the abuses to which the new billion dollar spoonholders might give rise. Studying in the sacred precincts, "sanctum sanctorium" of this holy of holies was denounced in the bitterest terms. Tears were shed by many as this ghastly scene was depicted. Handkerchiefs were in evidence and many a doughty male inwardly vowed that come what may, never would he sink to such depths as to profane these temples dedicated to Eros, by carrying into one of them a book. An infidel could not do more. At this temple, books, like shoes, must be shed.

Dr. Gordon Wilson gave the history of the "Grand Old Spoonholder" of his day. He brought in history to prove his statements. Dr. Saloman's [sic] supplement to the Oxford Dictionary was his reference for the etymology of the Spoonholder. "Calf Eyes" and "insanity" were both suggested as possible roots of the now famous compound.

A sketch by Dr. Saloman [sic] was produced by Dr. Earl Moore with sound and unsound effects by the orchestra directed by Dr. R.D. Perry. The melodrama of "No, No, A Thousand Times No" was a "howling" success. Chicken cackles, train whistles, automobile horns, galloping of the horses were heard.

"The Man on the Flying Trapeze," "Th Old Grey Mare, Ain't What She Used To Be," Socrates, Emerson, Oswald, Clara Bell, Reginald, Columbus, Milton, "vail-laid-end-to-end" all play their part.

Mr. James Cornette, as an anti-climax, brought forth a puppy, who was seeking the now easily- found-puppy-love.

The broadcast was sponsored by the Remington Arms Company.

The new spoonholder is completed. A better spoonholder of steel beams and concrete and well made sets. But many years must elapse before it can acquire the air of romance which enhanced its dilapidated predecessor. Another spoonholder is being built just across the drive from the library [Gordon Wilson Hall]. It will be concrete too. While concrete is not so romantic as wood, it is more durable, and since human nature has not changed in the least, these two structures will probably be put to much the same use as those of former years.

It is gone, and there are few who could tell why it was so named. It had nothing to do with cutlery, I hardly need say; it was not a receptacle to hold spoons or other tableware. But in its way it has contained many a heart that must have rattled around like a whole set of knives, forks, and spoons of Woolworth's sterling silver. Good old Dr. Kinnaman gave it its name, consciously or unconsciously, for he told us more than twenty years ago that a certain place in the college where he was educated was so frequented by love-lorn couples that it acquired this name. On the famuous trek to the General Assembly in Frankfort in 1912, a young man who is hardly so young now acted as news butch and sold spoonholders on the long train; incidentally, he had a sore throat for a week or two thereafter. Various places were temporarily called spoonholders, but the name stuck in only one instance. Some twelve or fourteen years ago, when the loafing place around the big elm was built, the old-timers recalled the term Dr. Kinnaman had used. At first the teachers rather frowned on the name; later they accepted it as officially the name of West Hall or the Training School. It had become within a brief time, an institution.

Decay of the wood in the structure, primarily was the cause of its being torn away, but it was never so popular after the Library [Gordon Wilson Hall] was built in 1926. Somehow the place seemed too crowded. A more sophisticated group, who probably liked the smell of tobacco smoke to flit through their romantic moods, long ago deserted it for other places. But, like all the good people who are buried in Spoon River and other graveyards, it is "gone but not forgotten." The next school generation after my day may forget what they learned in English, and Math, and Phys. Ed., but they will not forget the exquisite moments of the Spoonholder.

For many years, beneath the spreading tree in front of old Potter Hall, there was an institution of learning called the "Spoonholder."

Before the new one was built in the spring of 1935, there was a much smaller one of all-wood construction. It had stood there for what seemed countless ages accommodating the ever flowing tide of students on the Hill. It was used for a resting place between classes during the day and as a substitute for the library at night.

In the spring of '35 the heads of the institution got together and decided that there should be a new "Spoonholder." The reason for this was twofold; first the old one was rather antedated and was rather dangerous, and, too, it squeaked when couples sat on it, which was very disconcerting. And, second, due to the increased enrollment it was necessary to enlarge the "Spoonholder" to accommodate the long waiting line.

The new structure was widespread in octagonal shape with seats around the tree and also around the outside rim. Although no one ever saw it full, the estimated capacity was well over one hundred. It was christened by Dr. Louis B. Saloman, who also gave the dedicational address in chapel. He used a bottle of milk as the christening liquid, as it was most appropriate and most accessible.

Failure, however, was inevitable. The students didn't patronize the new "Spoonholder" as it was anticipated, probably because they thought it was not snug enough and it is only human to avoid large open spaces; but the real reason behind the failure was that the god of love had been frightened by the disturbances of his resting place. It never clicked somehow. And now it is gone like the good old days. It was Tennyson who said, "Old order must fade, yielding place to new, lest one good order should corrupt the world." We have witnessed these words come true.

Recently, because of the new classroom building [Cherry Hall], it was imperative that the "Spoonholder" be demolished. Few realized that when this structure was razed it was the death blow to a fading tradition.

The next generation will never know about the "Spoonholder" unless they read the history of the Hill which is written around it. But to us who remember the old "Spoonholder" and the traditions that surround it, there will long remain the memory of the happy hours and the nights not spent alone in the cradle of love.