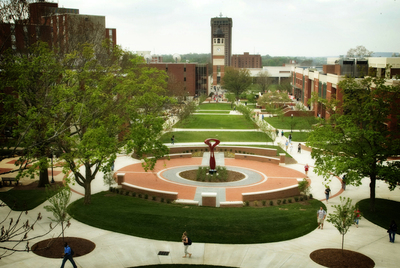 The Centennial Plaza or Mall and Centennial sculpture was dedicated on November 18, 2006 as part of the WKU Centennial celebration.

Centennial - A commemoration of one hundred years through positive and negative shapes - the red steel form marking the first century, with the interior a portal into the future.

Gino Miles - Growing up on a farm on the western slope of Colorado gave Gino Miles an early understanding of the physical elements and balance of nature. The texture of the plowed fields, the patterns of the irrigation ditches and canals crisscrossing the farmland, interspersed among the outcroppings of stone and foothills gave Gino a sense of balance. Farm work gave him experience in hard physical labor, mechanical knowledge, and patience to see things through to the end. Sculpting is a nurturing act.

In the early 1970s, while attending the University of Northern Colorado, Gino became interested in painting and sculpture, which led him to Florence, Italy. He helped found Italart, a school for American and German students in the Chianti region outside Florence. He taught design and sculpture classes while making and exhibiting his own pastels and sculpture. He studied in Universita per I Stranieri in Perugia and the Accademia di Belli Arti in Florence, where he received a Master of Art in sculpture from the University of Northern Colorado in 1979.

A central part of Western Kentucky University's campus gained a large piece of art Saturday afternoon, part of the dedication ceremony for the newly finished ""Centennial Mall" walkways that mark the last official celebration for Western's 100th anniversary of becoming a state institution.

About 50 people - mostly university staff, with a few alumni and several current students - watched Lee, President Gary Ransdell and Sculptor Gino Miles at the unveiling of Centennial, an artistic centerpiece for the Centennial Mall plaza.

The red-painted steel sculpture, a curving hammer-shape with an opening in the center, is meant to express a love of family, knowledge and beauty, Miles said.

Students have been strolling the finished walkways between Downing University Center and Bates-Runner, Northeast and Southwest halls for months. But the brick pavilion between DUC and Bates, one end of a set marking what was once Virginia Garrett Drive, was only finished last week.

Ransdell asked the crowd to recall the street crowded with cars and people, and contrast that with the pedestrian-only walkways that he envisions as the site for conversations and events for decades to come.

Lee said Ransdell was the "prime architect" of the mall, which forms part of a campus plan that echoes Western founder Henry Hardin Cherry's desire for a cohesive campus in the 20th century.

Building the mall took most of two years' funds in the university's small projects budget, which is paid out of tuition and annual state funding, Ransdell said.

"We spent about $2 million from (Florence) Schneider Hall to the Academic Complex, and from Normal Drive to the Avenue of Champions," he said.

As part of the university's move into the 21st century, Ransdell said, Information Technology Vice President Richard Kirchmeyer has announced that the full extent of Centennial Mall offers a wireless Internet connection.

"That eventually will spread throughout our entire campus," Ransdell said.

Ransdell and his family have donated 100 cherry trees - a tribute to Henry Hardin Cherry - planted along the mall. But talk continued for months over what to put in the center of the mall plaza, he said.

He committed at the university convocation in August to bring more visible art to campus, and when attending meetings in Santa Fe, N.M., Ransdell and his wife, Julie, strolled through that city's Canyon Road art district.

They discovered Miles' shop and met the sculptor, admiring his work. As they left, they saw a finished sculpture on the hill above them, Ransdell said.

"Immediately we knew: That's it," he said.

That work had been commissioned by the city of Dallas, Texas, but Miles agreed to make another in 90 days, soon enough for the Centennial Mall dedication, Ransdell said.

Miles' price fit "perfectly" in the university's art budget, allowing purchase of two more small sculptures now in place in front of DUC and between Grise Hall and Bates, he said. Total cost for the artworks was about $76,000, according to Ransdell.