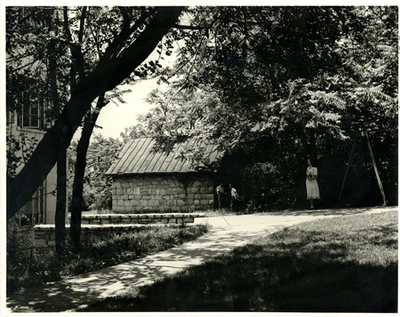 Small stone building that was located behind Cherry Hall. It may have been used as a powder house for Fort Albert Sidney Johnston during the Civil War. It was razed in September of 1969 during a generalized renovation of the old fort area.

"Every leaf of grass is a miracle." -- Walt Whitman. As I came across the campus today after my brief talk and walk with you [Kelly Thompson], I recalled that I had quoted this line from Whitman to show how every inch of the campus is sacred. What I specifically though about was that there is nothing on the hill now that was there when we moved to the hill on February 3, 1911, except the big elm in front of Cherry Hall, the fort itself, and the little stone house (the old part) that houses the transformers. Everything else has been built or has grown up in the forty-eight years since we moved . . .

With the tearing down of the front part of the transformer house back of Cherry Hall went the last structure that was on the campus in 1911, when we moved from the bottom of the hill. . . . Thus passes, with the little transformer house, a whole series of things: Potter College, Cabell Hall, the Charles Taylor House on the farm, numerous Negro houses in Jonesville as it was when Urban Renewal came on, and many more on the Russellville Road, across from the Kentucky Building. Several younger teachers have spoken about Cherry Hall as if it were a century old. When I told them we occupied it in the fall of 1937, they looked puzzled, but to younger people 1937 and 1867 do not seem very different.