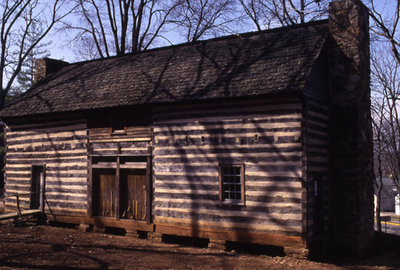 Namesake - The cabin is named for the family that built and lived in it.

History - The home was built in Logan County ca 1810. Archibald Felts built it for his family to stay safe. When Felts went to meet some family in Nashville, the home was burned by Indians. When his family made it to Bowling Green they lived in a cave while Felts built what is now known the Felts Log House. His descendants lived in the house until 1960.

The house was donated to the Kentucky Museum in 1979 by its most recent owner, Sam Houston Watkins. The house has two chimneys and a dogtrot. When the house was moved to Western it was converted to a pioneer museum. It took movers three days to move the house. It has since been furnished with pioneer-era reproductions.

1980 - it took three years to completely restore the house; rotten logs, siding, and mud chinking was replaced, a roof of hand-split red oak shingles was added