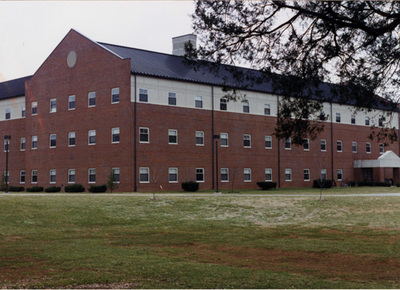 Namesake: Donald Zacharias was born September 18, 1935 in Salem, Indiana. He received a BA degree from Georgetown (KY) College in 1957. After a year as a high school teacher, he enrolled in Indiana University and obtained his MA in 1959 and PhD in 1963. After graduation he joined the faculty of Indiana University. Zacharias moved to the University of Texas Austin in 1969 where he advanced to Assistant to the President by 1974. When selected as Western's president, he was executive assistant to the chancellor of the University of Texas system. [Harrison, p. 264]

Building History: Meredith and Zacharias Halls were financed together by the sale of $7,041,186 bonds and repaid through housing fees. A three story building containing 104 double occupancy, suite style rooms, six resident assistant's rooms and an apartment for the resident hall director. It housed 212 students and the director. The facility features a lounge/recreation room, a computer room and laundry room. Each floor has a study room and full kitchen. The building was dedicated April 29, 1997 in honor of former WKU president Donald Zacharias.