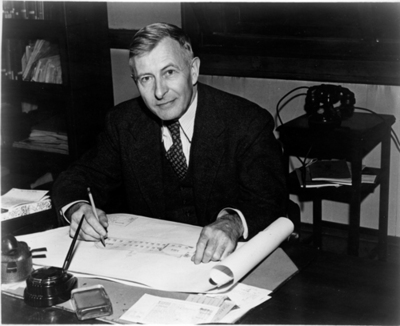 Paul Loos Garrett, second president of WKU, was born at Waddy near Shelbyville, Kentucky. He earned an A.B. degree from Georgetown College (KY) in 1914 majoring in history and political science and an M.A. in 1935 in psychology and education. He did additional graduate work at the University of Chicago and the University of Kentucky. In 1938 Garrett received an honorary LL.D. from Georgetown College. After a brief stint in the army during World War I, he taught at several high schools in Kentucky, becoming superintendent of the Versailles city schools in 1924. In February 1937 he took a leave of absence to serve in A.B. "Happy" Chandler's administration as director of the Division of Personnel Efficiency. [Harrison, p. 110]