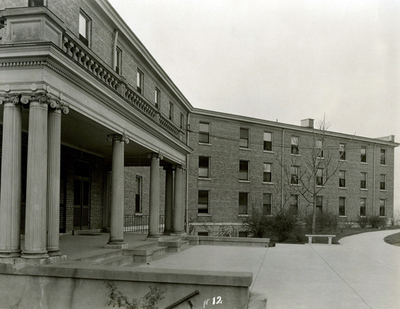 Architects - D.X. Murphy and Co. and Brashear and Cohill

Namesake - The building was named after J. Whit Potter (1851-1923). He was born in Warren County and was a regent of Western Kentucky State Normal School. He was also the President of the American National Bank and Potter-Matlock Trust Company.

The entire chapel hour at Normal school was devoted to honoring the memory of J. Whit Potter this morning. Appropriate talks were made by H.H. Cherry and Prof. J.B. Alexander, who were life-long friends.

The Normal school flag rests at half mast today.

The following resolutions were adopted by the school:

A man, a business man, a gentleman, a Christian man - for Mr. Potter was all of these - has gone to his reward. In his going, he has left a train of saddened hearts. Many of us may hardly hope to see his like again. The lack of his smile, his courage, his keen but kindly counsel is a loss that cannot be waived. But his work while he lived among men will not die. Thousands of better men and women stand as monuments to the poer of his living.

During the sixteen years he was Regent of the Western State Normal. Every inch which the institution has added to its stature is ineffaceably stamped with the thought and service of J. Whit Potter.

He has gone, but the rest is not silence. Gratitude for his achievements will find expression even in generations not now born.

History - When the 3-story building was built in 1921 it was originally a women's dorm that housed 175. Dedicated on June 21, 1921, the cost to live there was $8.50 a month. It also had a 300 seat cafeteria for the girls to dine at. From 1942 until the end of 1943, air cadets occupied the building. In 1949, the dorm was converted for a women's dorm into a men's dorm. In 1957 Potter Hall went back to a girl's dorm because of two new men's dorms that were built. In 1994 (approximately), the building was renovated into an office building. Offices included admissions, financial aid, counseling services, career services, and the registrar.

Additions: 1949 - converted from a women's dorm into a men's dorm

1957 - new furniture for the rooms, rooms were redecorated, bathrooms were retiled, lobby was rebuilt, and new entrance was installed for use as women's dorm