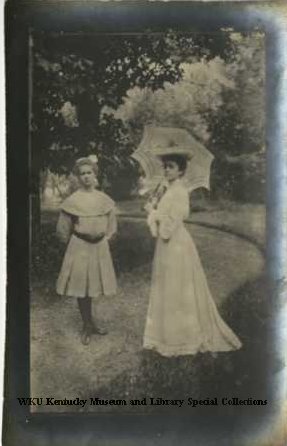 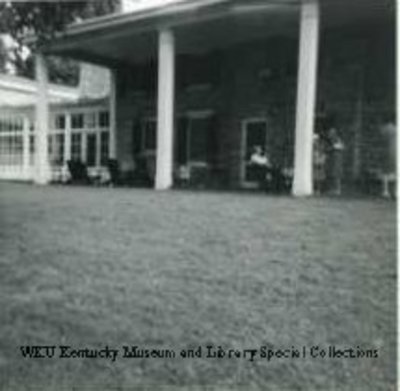 Identified persons are Evelyn Tackett, and Agnes Walcutt. This home is ”listed on the National Register of Historic Places and located at 6917 LaGrange Road, The Locust is the oldest standing structure in Pewee Valley that still reveals its early form as an important example of an early stone house in Oldham County, a Pewee Valley country estate, and for its role as the setting for many of The Little Colonel books written by noted Pewee Valley children’s author Annie Fellows Johnston. The house consists of an L-shaped stone section probably built in several stages around 1800, a large, nearly square hip-roofed brick section probably built during the 1830’s, and a rear, frame, bedroom
wing and an extension of the north front corner of the brick section, which date from about 1903. The one-and-a-half-story early stone portion of the house, itself built in at least two stages, has a full-width, full-height portico that used to be the front façade of the house. The present front entrance, turned 180 degrees from the original entrance and located in the 1830’s one-story brick section, has a flat-roofed porch capped by a Chippendale-styled balustrade and large, double-paneled doors topped by overlights. The house is part of a 4,000 acre land grant given to Samuel Beall in 1784.” (from http://www.littlecolonel.com/theLocust.html)