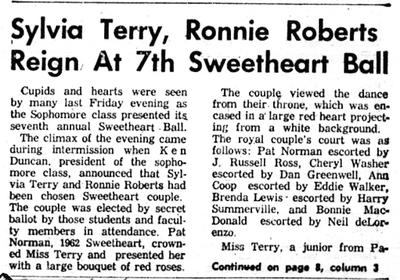 Cupids and hearts were seen by many last Friday evening as the Sophomore class presented its seventh annual Sweetheart Ball.

The climax of the evening came during intermission when Ken Duncan, president of the sophomore class, announced that Sylvia Terry and Ronnie Roberts had been chosen Sweetheart couple. The couple was elected by secret ballot by those students and faculty members in attendance. Pat Norman, 1962 Sweetheart, crowned Miss Terry and presented her with a large bouquet of red roses.

The couple viewed the dance from their throne, which was encased in a large red heart projecting from a white background. The royal couple's court was as follows: Pat Norman escorted by J. Russell Ross, Cheryl Washer escorted by Dan Greenwell, Ann Coop escorted by Eddie Walker, Brenda Lewis escorted by Harry Summerville, and Bonnie MacDonald escorted by Neil deLorenzo.

Miss Terry, a junior from Paducah, is majoring in English and Spanish. She is a varsity cheerleader, a member of Beta Omega Chi Sorority, and active in several other organizations.

Roberts, a sophomore from Louisville, is majoring in business and is a member of Sigma Phi Alpha Fraternity.

The bandstand was also decorated with the traditional colors of red and white. With the "Epics" from Louisville furnishing the music.

A crowd of approximately 450 students watched the coronation ceremonies with several members of the faculty in attendance.