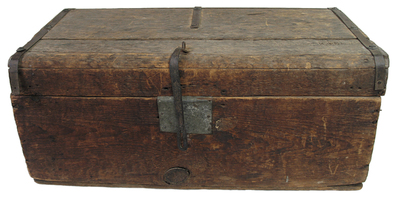 Slave trunk reportedly made in Calloway County, Kentucky, by an enslaved individual for "Aunt Jude" Beach. who also was enslaved.

Note: Documenting the lives of 19th century African Americans, especially formerly enslaved individuals, is challenging. Beach/Bean/Smith family tradition holds that "Aunt Jude" Beach (b. about 1805) was an enslaved woman who was part of the dowry of Mary J. Beach (1827-1897) of Henry County, Tennessee. Both women moved to Calloway County, Kentucky, after Mary Beach married Dempsey Bean (1829-1910) in 1849. The property of Aunt Jude, this trunk was reportedly made by an unknown enslaved individual. While Jude Beach does not appear on the 1850 or 1860 U.S. Census, the 1880 Census lists Juda Beach. According to the later Census, she was born in Virginia, had been widowed and currently was employed as a servant. Her information was recorded immediately following the data for the individuals in Dempsey Bean's household.