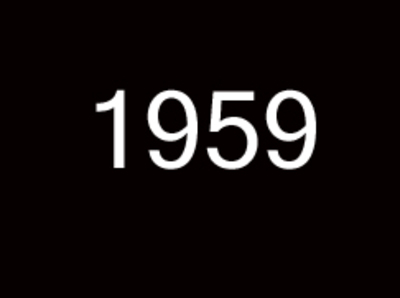 May 7 - the Board of Regents agree to allow honor societies on campus.

During a year of Russian and American satellites, Presidential tours, and Summit talks that didn't last, Western and those associate with it have made history of their own.

As we view the past year of 1959-60 at Western Kentucky State College, we note events that mark personal achievement – achievement for Western: concerts and dramatic presentations: contests and honors won by and for the school: students recognized for leadership ability and scholastic proficiency. We mark the planning of new buildings and the construction of others, new programs and curricula planned and put into action and new faces on the Hill. We even had our own walkout – not on a Summit conference of course, but perhaps basketball games are little Summits!

As the 1959-60 school year began, Western announced its largest enrollmentever with 2,918 students on the Hill: "Inherit the Wind" was planned as the Players' first production of the year: and twenty-three new members were added to Western's faculty. Cheerleaders, Diane Robinson, Sandra Jogoe, Roberta Johnson, Martha Johnson, Rachel Chadwick Roll and Janet Brewer began leading yells for the Topper football team.

At the same time Norman Childs and Pat Richards were chosen to lead the freshman and sophomore classes respectively, thirty-three seniors were elected to Who's Who for 1960.

The 'Topper footballers blasted Eastern 14 to 7 at the same time that Billy Booker, Ron Downard, and Herb Wassom earned berths on the weekly honor roll of the O.V.C. Meanwhile, the senior class was fighting a battle of its own which resulted in a special election for senior officers with Ron Sheffer being named as class president.

Western was once again awarded a grant by the national Science Foundation, this one for $76,000, as the new chimes, installed by the College Heights Foundation, rang out over the campus for the first time. With Western's full admission to the National Association of Schools of Music, also came plans for the annual Military Ball where Carolyn Turner was crowned queen. As the basketball season opened, the 'Toppers set a new record as they blasted Union University with a score of 123 - 71.

As the new state administration went into office, six Western grads were named to state posts by Governor Bert Combs. With the inning of the Sugar Bowl championship, came also Coach E.A. Diddle's 700th win of his career. Two fast talking young men were named winners of the Ogden and Robinson Oratorical Contests. Their names – Bob Schneider and Charles Wade. During the week when Marilyn Ashby was selected as Western's Mountain Laurel representative, the now famous Western-Eastern game began and lasted only 13 minutes!

Another National Science grant brought Western's total over the past 22 months to $232,110, while Anne Shaver and Martha Clayton took top honors in the AAUW and SNEA Oratorical Contests respectively.

Western Player's production of Much Ado About Nothing was followed immediately by plans for Ninotchka, while the 'Topper basketball men were busy winning their eighth OVC net crown, and NCAA playoffs at Lexington. New plans and funds for a $1,500,000 science building were announced, and a mock legislature was inaugurated on the Hill.

Returning from the NCAA playoffs at Lexington, 1,000 Western students were stranded by the heaviest snowstorm in many years which resulted in the first dismissal of classes for weather reasons in 9 years. During the annual observance of National Library Week, President Thompson and Miss Margie Helm were listed for the first time in Who's Who in America.

The Acappella choir left the Hill to tour southwestern Kentucky, at the same time the College Heights Herald was awarded a Medalist Rating by the Columbia Scholastic Press Association. A special NEA workshop brought many distinguished visitors to the campus as plans were made for the 386thKEA breakfast, which was to be attended by 800 Westerners.

With springtime in the air, Western Players planned a production of Picnic as a mock government was formed for the first time in "Vet Village."

With the crowning of Talisman king and queen, Jude Talbott and Rachael Chadwick Roll, the last weeks of school sped toward the commencement activities at which Governor Bert T. Combs and Dr. I.E. Lunger spoke to the 270 graduates. During this time Jim Skaggs and Tom Covington were chosen to head the Herald staff for 1960-61 as editor and business manager. Chloe Ann Cooper and Patsy Byrd were also named as editor and assistant editor for 1961 edition of the Talisman.

So the year has drawn to a close with many fine memories of people, work, friendship, and education that have made up the year of 1959-60 on Western's campus. With the promise of even greater days to come, we can feel only joy over the days past and expectancy for the future.