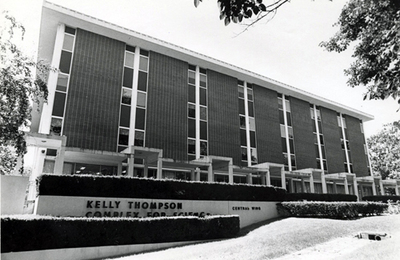 Namesake: Kelly Thompson was born in Lebanon, Kentucky on January 28, 1909. He came to Western in the fall of 1928 on a football scholarship and earned bachelor’s and master’s degrees. Thompson spent his early career at WKU as college representative and publicity director. During World War II he served in the Navy, after which he returned to campus to work as an assistant to E.A. Diddle and President Paul Garrett. [Harrison, pp. 139-143]

During his tenure as president, Thompson oversaw a steady increase in student population which resulted in the construction of new buildings and WKU gained university status in 1966. He stepped down in 1969 and later went on to serve as president of the College Heights Foundation. Thompson died August 14, 1993.