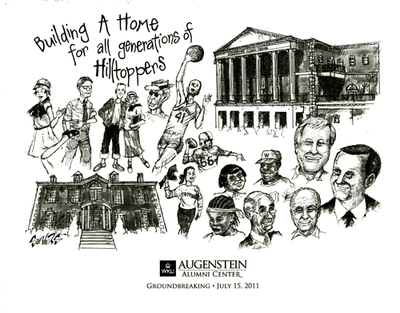 Building History:
Groundbreaking was set for July 15th, 2011. Part of the reason for an alumni center was that the university had outgrown the current alumni center. In fact, the-then alumni center was "originally the President's house, and it was never built…for offices and event holding." Also, the university wanted a building that would "100 years from now still fit in with the campus." Construction was expected to take at least 15 months, completed by fall of 2012. However, spring flooding of the parking structure and the plant where construction used materials from delayed construction. The completion date was pushed back to November 2012. It was further pushed back to February 2013. In the meantime, the building was set to receive a Leadership in Energy and Environmental Design (LEED) certificate, indicating environmentally friendly practices and helping WKU obtain recognition in sustainability. Construction was complete on April 2013, with its opening ceremony on April 12th.

At over 30,000 sq. ft., the Alumni Center would be at least three stories high. The first floor would include ballroom space, a WKU museum, and a gallery with photography and artwork done by WKU students and faculty. The second floor would host a library, a dining room, boardroom, auditorium, and a "Hall of Inspiration" which would display a group of "distinguished alumni plaques" and cases showing "what WKU alumni have done." The second floor would also hold a fireplace similar to the previous alumni center. The top floor would be wholly reserved for office space. It would also include a Big Red statue in front of the building. Additionally, it would serve as a welcome center for prospective students. Centered on Alumni Square, the alumni center would be built alongside a restaurant, hotel, café, and WKU Apartments once completed.

The final product came with a few new twists. A program called the "alumni college," which provided a "week's worth" of courses taught by the faculty. In addition, alumni who graduated 50 years ago, there was the Golden Anniversary Club.

Namesake:
Dale Augenstein is a native of Owensboro, Kentucky. During his time in WKU from the late 1970s to the early 1980s, he was very active on campus. He was a cheerleader for football and basketball and served as president of Sigma Alpha Epsilon fraternity. In 1979, he filled in for an absent cook who was out for a couple of weeks due to illness. He graduated from WKU in 1981 with a business administration degree and a minor in marketing.

Augenstein travelled to Lexington, where he got a job at Jerricho's Corporation via the Kentucky Chamber of Commerce. He was later promoted to the marketing director of the chamber, which he served for four years. Then he went to the Webb Company for a couple of years. In 1987, he travelled to Hilton Head Island, South Carolina to work for the town's chamber, becoming president in the process. March 1991, Augenstein visited a friend in nearby Beaufort at Steamers Oyster and Steakhouse. The steakhouse made such an impression on him that, in response to another friend who "needed a boost" for his resort, Augenstein sold Steamers to the resort. The merger lasted only two months, however, before the distance between the island and Beaufort became a problem for the friend. In turn, he sold the restaurant back to Augenstein. On Sep. 1st, 1991 Augenstein became the owner of Steamers Oyster and Steakhouse restaurant on Hilton Head Island, South Carolina.

However, Augenstein never forgot about his native Kentucky, in particular WKU. Beginning in the summer of 1992, he has been hiring WKU students to work at the resort. He has also been giving back to WKU and the Bowling Green community as a whole. In the fall of 2010, Augenstein donated at least $1 million to the construction of the new alumni center, which was dedicated in his honor. On Feb. 2015, he bought the former Mariah's restaurant on State St. and made it a second location of Steamers.

Augenstein's contribution to WKU has definitely not gone unnoticed. He served as president of the WKU Alumni Association in 2011-2012, during which he also served as chairman for the Alumni Center Building Campaign. In recognition, he was rewarded with the highest honor for WKU volunteers, the 2012 Distinguished Service Medal.