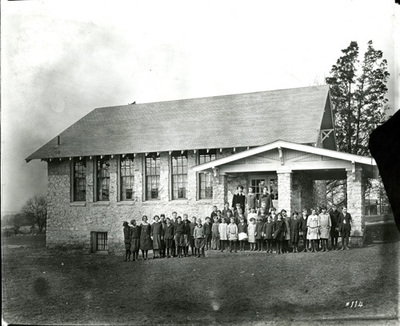 WKU Board of Regents approved the construction of a Model Rural School at their December 30, 1919 meeting.

The building opened on July 4, 1923 and was in charge of Ms. Ethel Clark who was a "rural expert". It was used for demonstration work and was located on campus behind the music building. When the school first opened, twelve students did their practice teaching there and many more took observations of approximately 40 children. The purpose was to train teachers for service in a one-room school house. The building was razed in 1957 to make way for a parking lot. "Because the one-room schools are being abandoned in favor of consolidated programs, the Rural School was discontinued last year." [Park City Daily News, March 24, 1957]

1930 - January 23 almost proved a fatal day for the Model Rural School Building on Western campus, when fire swept the interior of the basement and threatened the entire building.

The fire was discovered by J.C. Howard and W.S. Miller, students of Western. The young men quickly turned in the alarm that brought the City Fire Department to the rescue. The fire was soon brought under control and the model building saved.

The damaged were estimated to be between five and six hundred dollars. The entire loss was covered by insurance.

At present the school activities of the rural school are being carried on in one of the rooms of the Manual Arts Building. It is hoped that within the next few days, repair on the building will be finished and work may be resumed. [College Heights Herald, March 1930]