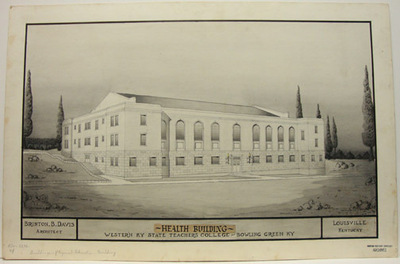 Namesake:
Margie Helm was born in Auburn, Ky. "She received her B.A. degree from Randolph-Macon Woman's College in 1916, and the M.A. degree in 1933 from the University of Chicago Graduate Library School. Miss Helm became assistant librarian at Western in 1920, librarian in 1923, and Director of Library Services in 1956. She served in this capacity, and as Head of Library Science, until her retirement in 1965. Miss Helm is a member of numerous professional organizations and has contributed articles to various publications. She won the Business and Professional Women's Club award in 1950 as the Outstanding Business Woman of Bowling Green. She was honored in 1964 as the Outstanding College Librarian for Kentucky by the Kentucky Library Association" [Peaks of Progress]

History:
When the building was first opened in 1931, it was used as a gymnasium that could hold up to 5,000 people. During the last basketball season in the Health & Physical Education Builidng, the building was erroneously referred to as the "Big Red Barn" in several newspaper articles. Upon the completion of Diddle Arena in 1963, the building was renovated into a 70,000 square foot library to accomodate over a 1/2 million volumes on three floors with a seating capacity for 1,000 students. The building also housed the Library Science and Industrial Arts departments along with librarians. The library was dedicated on October 14, 1967.

Additions/Renovations:
1965 - renovation and conversion to a library, estimated $1 million